While pacemakers and other biomedical implants and implantable devices are somewhat more resistant to electromagnetic interference (EMI) than in previous generations, there are also more sources of potential EMI from new technologies such as hybrid vehicles, wireless chargers and so forth.

For example, the DC magnetic field from headphones can exceed 10 Gauss and can demonstrably interfere with the operation of a pacemaker. Cardiac centers a few years ago did a study and found that up to 15 % of patients with a pacemaker experienced interference issues when headphone came within 1.2 inches of the device, and up to 30 % of patients with an ICD (Implanted Cardioverter Defibrillator) also demonstrated operational abnormalities caused by the close proximity of the speaker.

While cell phones and MP3 players are less likely to cause issues, they should still be kept away from the heart / bioimplant area as there is a chance that RF energy from these electronic device could cause unpredictable behavior. Several years ago, there were some studies that indicated that MP3 players themselves (separate from the magnetic field of the speakers) could not affect a pacemaker, but since then MP3 players have evolved to other transmission modalities which involve using radiated Bluetooth frequencies.

Also, very recent studies (June 2015) have shown that cell phone can influence pacemakers in unexpected ways. At close range (within 6 inches) pacemakers can misinterpret the signal from a cell phone as a cardiac signal which then responds by consequently pausing the cardiac rhythm of the patient and could lead to fainting. For ICDs, the cell phone signal could be mistaken for ventricular tachyarrhythmia and lead to a painful shock as the ICD is programmed to respond to what it thinks is abnormal heart rhythm.

Also, high electric fields such as those beneath high voltage power lines could induce similar behavior if the implants are set to configurations which lower their EMI susceptibility. 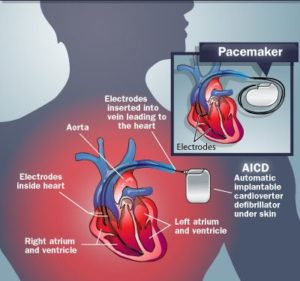